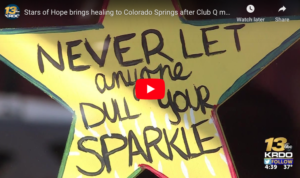 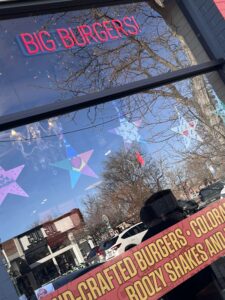 Hope after Club Q: Bringing light to a broken community 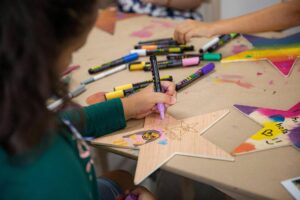 Painting as Therapy: How Stars of Hope is Using Art to Help Trauma Survivors Find Healing and Resilience 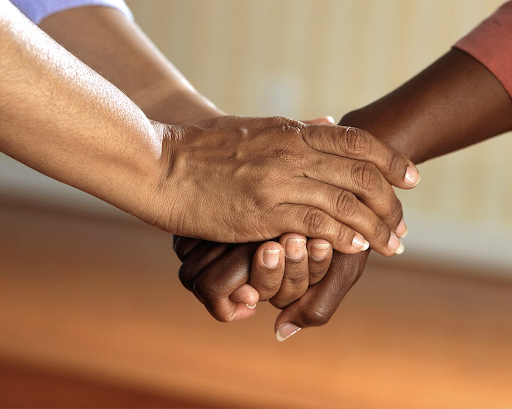 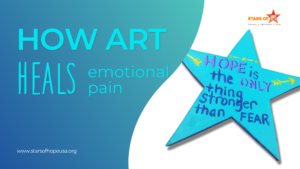 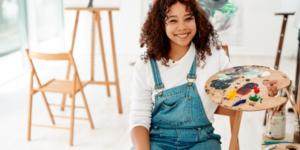 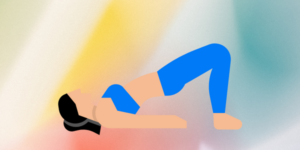 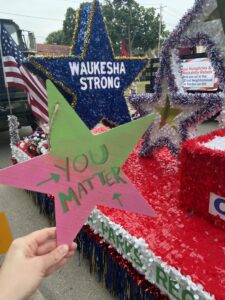 In this series, we celebrate organizations that create hope where it’s needed most. Our first spotlight shines on KPMG LLP.

A longtime collaborator with Stars of HOPE, KPMG is one of the world’s largest professional services firms. For twenty years — in fact, since our parent organization New York Says Thank You (NYSTY) was founded in the wake of 9/11 — KPMG partners and professionals have volunteered with us, both individually and firmwide.

Jennifer Flynn Dear, KMPG’s managing director of Community Impact, recently spoke to us about what Stars of HOPE has meant to the firm — and what it can mean for other organizations’ volunteer initiatives.

“At KPMG, we are committed to our clients, our people and our communities,” Dear said. “Enabling our people to get involved with NYSTY after 9/11 was a way to serve all three. Our first experience was the restoration of the 9/11 flag, which involved hundreds of KPMG professionals around the country literally stitching the flag together. We hung the restored flag in the lobby of our New York office, and the effort really blossomed from just a New York project to a full national commitment from KPMG.”

What started as a way to promote healing after the World Trade Center attacks has become an ongoing employee volunteer initiative with Stars of HOPE.

“It’s a way for employees to use their creativity to bring hope to communities,” Dear said. “I’m confident that if organizations engage in an initiative like Stars of HOPE, they’ll be hooked.”

KPMG’s success can be found in its core philosophy of working “Together, For Better.” It’s not just talk. KPMG’s people live these values, sharing a sense of purpose in the work they do and a strong commitment to community service. Even with the ongoing impacts of the COVID-19 pandemic, KPMG’s people volunteered nearly 82,000 hours of service in 2021. This year, in celebration of the U.S. firm’s 125th anniversary, the firm is encouraging its people to serve their communities on August 2, 2022.

KPMG’s commitment to its communities has garnered numerous recognitions. The firm was named one of Fortune Magazine’s 100 Best Companies to Work For 15 times and one of PEOPLE magazine’s 50 Companies that Care. Points of Light has also recognized KPMG as one of the most community-minded companies in the U.S. for six consecutive years.

A Culture of Caring

One of Stars of HOPE’s first events was in Joplin, Missouri, back in 2011 when a tornado devastated the community. Although the organization was small at the time, around 25 KPMG people showed up to help support those affected by creating and displaying stars throughout the town.

“It’s very different from the average volunteer activity,” Dear said. “It might not seem like much, painting the star, but when you share stories — the video that shows recipients receiving stars and what it means to them, it’s moving.”

Dear, who lives in Florida, made stars for survivors after the mass shootings at Parkland and Pulse Nightclub, two of the worst tragedies in U.S. history.

“Every time I drove by the stars on display in downtown Orlando in support of the victims and families of the Pulse tragedy, I could see the hope and strength of our community in spite of the terrible loss.”

In South Florida, several KPMG employees had attended Marjory Stoneman Douglas High School, and one employee’s mother was a teacher at the school. After the mass shooting there, the Fort Lauderdale office of KPMG made stars and delivered them to the school when it reopened.

“Stars of HOPE provides an opportunity to bring hope to communities when they need it most and to improve the lives of those impacted by tragedy,” Dear said. “This caring spirit has been part of our KPMG culture since our beginning 125 years ago, and we continue to make efforts to improve communities and leave them better than we found them.”

The Stars of HOPE program is available to all offices at KPMG. Stars of HOPE banks are located across the globe, and anyone can get involved.

If you’d like to learn more about how your organization can get involved with Stars of HOPE, please click here.